Flakka is the use of a dangerous synthetic cathinone drug called alpha-pyrrolidinopentiophenone (alpha-PVP), popularly known as “Flakka,” is surging in Florida and is also being reported in other parts of the country, according to news reports. 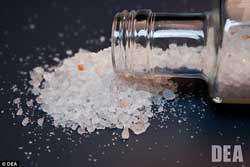 Alpha-PVP is chemically similar to other synthetic cathinone drugs popularly called “bath salts,” and takes the form of a white or pink, foul-smelling crystal that can be eaten, snorted, injected, or vaporized in an e-cigarette or similar device. Vaporizing, which sends the drug very quickly into the bloodstream, may make it particularly easy to overdose. Like other drugs of this type, alpha-PVP can cause a condition called “excited delirium” that involves hyper stimulation, paranoia, and hallucinations that can lead to violent aggression and self-injury. The drug has been linked to deaths by suicide as well as heart attack. It can also dangerously raise body temperature and lead to kidney damage or kidney failure.